The smell of apples and cinnamon is always one of the scents that make your house seem like a home.  And what a delicious way to start off your day and you can kind of convince yourself it’s almost healthy because there are apples in these rolls.  Make these the night before and let the dough rise for the second time (after you’ve made the actual rolls and put them in the greased pan) covered by plastic wrap in the refrigerator.  If you want an even easier way, you can buy the sweet dough frozen at the grocery store and allow it to rise for the first time before spreading it out and filling it.  I used a bread machine to do all the hard work for me this time. 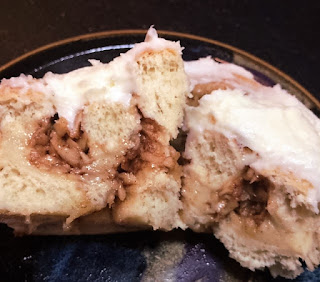 Put In your bread maker  -
4 ¼ cups flour
1 1 /2 tsp salt
1 egg
Add in the yeast and milk mixtures and turn on machine on the dough setting.
When done, spread out into a 12 x 18 shape and top with –
3 tbsp butter, softened to spread over dough
3 apples, shredded and mix in 2 tbsp lemon juice so they don't turn brown
½ cup brown sugar
1 tbsp cinnamon
2 tsp flour
¼ tsp salt

Mix together the brown sugar, cinnamon, flour and salt and sprinkle evenly over the buttered dough.   Roll up the 11” way.  Cut dough.  I cut in half, in half again and then half for the final time so you end up with 8 equal slices. And place in a greased 9 x 13 pan and allow to rise until it reaches the top of the pan.  Bake for 35 minutes at 350°.  Allow to cool before icing.
Icing
3 tbsp butter, softened
3 oz cream cheese, room temperature
1 ½ cups powdered sugar

Mix together in a small bowl and spread over cooled apple cinnamon rolls.
Posted by Michele B at Friday, October 09, 2015

Email ThisBlogThis!Share to TwitterShare to FacebookShare to Pinterest
Labels: Breakfast