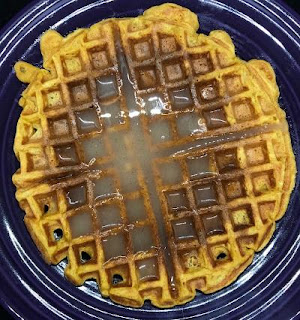 Pumpkin season is still going strong here.  Today I made pumpkin waffles for brunch and served it with some Cinnamon Syrup that I had in the freezer.

In a large saucepan, mix together corn syrup, sugar, water and spices.  Bring to a boil for 3 minutes.  Remove from heat and let sit for 5 minutes.  Stir in evaporated milk.  Serve warm

Email ThisBlogThis!Share to TwitterShare to FacebookShare to Pinterest
Labels: Waffles 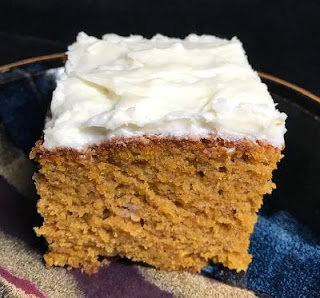 'Tis the season for everything pumpkin.  I bought a small sugar pumpkin and baked it yesterday to use in making a cake.  This cake is the perfect size so you don't get overwhelmed by too much pumpkin - it's an 8 x 8 size.

1 cup flour
1 cup sugar
1 tsp baking powder
1/2 tsp baking soda
1/2 tsp salt
1 tsp cinnamon
1/2 tsp ginger
1/4 tsp nutmeg
1/4 tsp allspice
Whisk the dry ingredients together and add in ~
2 large eggs
1/4 cup canola oil (or 1/2 cup and no apple sauce)
1/4 cup apple sauce
1 cup pumpkin
1/2 tsp vanilla
Mix all until completely combined.  Pour batter into a greased 8 x 8 pan.  Bake at 350 degrees for 40 minutes.  Do a toothpick check in the middle to make sure it's completely baked.  Cool before icing.  It's a good idea to take out your icing ingredients to soften while you are baking the cake.
Cream Cheese Icing
1/4 cup butter
4 oz cream cheese
1/2 tsp vanilla
1 1/4 cups powdered sugar
Use a mixer to get the icing ingredients completely mixed together.  Spread out evenly over the cooled cake.  Store in refrigerator.
Posted by Michele B at Sunday, October 11, 2020 No comments: 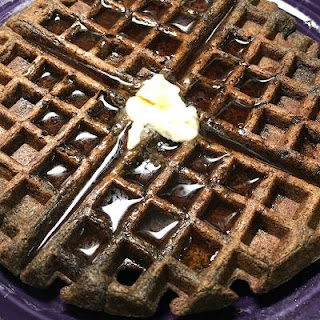 Buckwheat pancakes are my favorite pancake and bring back many happy family memories.  The other day, I was wondering if I could make a buckwheat waffle so I decided to try.  It worked and is delicious.

Sift all dry ingredients into a large bowl.  In a small bowl, beat egg whites until light and fluffy.  Gradually mix  buttermilk, egg yolk, and butter into dry ingredients.  Gently fold in the egg whites.

Bake per your waffle makers instructions.

Makes 5 waffles
Posted by Michele B at Saturday, October 03, 2020 No comments: 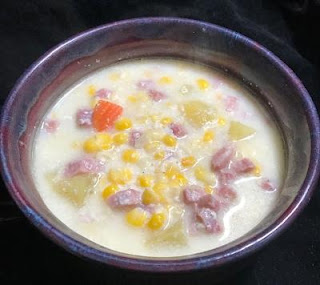 Cooler temperatures meant turning off the air conditioner and thinking about soups to warm up with.  I baked a loaf of honey wheat bread and made this soup since I had some corn to use.

1 cup ham, diced2 tbsp butter3 cups milk1 cup carrots, diced3 ears of sweet corn, shucked and cut off cobs2 large potatoes, peeled and diced2 dashes hot sauce1/4 tsp paprika1 bay leafSea salt and freshly ground pepper to taste
Melt butter in the bottom of your soup kettle or dutch oven. Stir in the flour.  Gradually whisk milk into the flour mixture.  Bring to a simmer and add in the carrots, potatoes and bay leaf.  When slightly tender, add in corn, ham and seasonings.
Posted by Michele B at Monday, September 07, 2020 No comments:

Email ThisBlogThis!Share to TwitterShare to FacebookShare to Pinterest
Labels: Soup 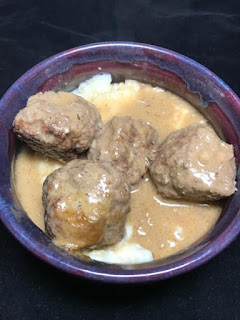 I needed some comfort food this weekend after round 2 with the stomach flu last week.  It was a good way to kick off my return to food with a new recipe.  I used my recipe for the meatballs from Swedish Meatballs but increased the amounts of things since I used 1.5# of ground beef instead of 1# as I had in that recipe.  As I was about to scoop the meatballs and put into the pan, I received a phone call telling me I should add cheese to the middle.  I put some Havarti into each.

Place the Panko bread crumbs in a bowl and pour the milk over it and allow to set for 10 minutes.  Add in the remaining ingredients and mix completely.  Scoop out into meatballs and place in a hot frying pan or Dutch oven with 1 tbsp extra virgin olive oil.

Remove the meatballs from the Dutch oven.  Deglaze the bottom of the pan with 1/4 cup red wine.  Melt 1/4 cup butter in the bottom.  Whisk in 1/3 cup flour and let cook for 1 minute before whisking in 4 cups beef stock gradually.  I added 1 tbsp Beef Better Than Bouillon for extra flavor.  Whisk in 1/2 cup sour cream and 1 tbsp Worcestershire sauce.  Return the meatballs to the Dutch oven and allow the gravy to thicken over medium heat.  Add salt & pepper to taste.  Serve over mashed potatoes or noodles.
Posted by Michele B at Sunday, March 01, 2020 No comments:

Email ThisBlogThis!Share to TwitterShare to FacebookShare to Pinterest
Labels: Meatballs 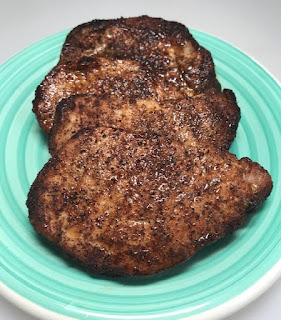 Pork chops are always good and this recipes spices them up.  There's a hint of sweetness due to the brown sugar that caramelizes on the outside with the chili powder and cumin. 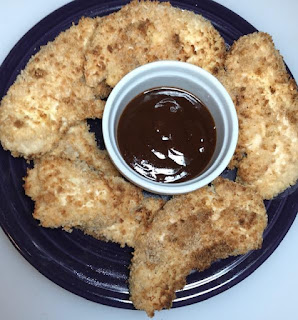 These are the easiest to make and the ultimate chicken tenders - crisp on the outside and juicy on the inside.  The best part is it only takes 15 minutes to cook.

Place in a large zipper plastic bag and allow to sit in the refrigerator for at least 4 hours.

Combine in a bowl ~

Remove the tenders from the bag and roll in the Panko mixture.  Place on the air fryer basket.  Cook for 15 minutes at 350 degrees.  Test the tenders to make sure they are 165 degrees.  Serve with your favorite dipping sauce.  I used a honey bbq sauce.
Posted by Michele B at Saturday, February 01, 2020 No comments: